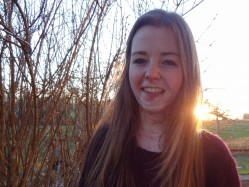 It is a warm summer evening. Isabel and her friends are standing around the fireplace expectantly. But the fire doesn’t want to start. One of the colleagues has an idea: he pours petrol into the fire. Flames shoot up explosively. Isabel catches fire. She burns.

This happened around two years ago. Looking back, the 17-year-old doesn’t remember how she did all that back then. Her long hair had to be cut off at the hospital. After the surgeries she was bound to wear a dressing on her face. She had wounds and scars where before her skin was smooth and intact. “I dreaded looking at myself in the mirror or seeing myself on photos. I was unhappy with my appearance. Meanwhile, this feeling has subsided. The scars are healing well and they are already much less visible. “Seeing this progress gives me new hope,” says the 17-year-old while her steel-blue eyes are sparkling. She tried to put aside the agonizing question ‘Why me?’, which often haunted her in the beginning. “If you always keep questioning yourself that, you’ll break.” Isabel’s attitude has always been to deal with the accident as quickly as possible. Or else there would be no strength left for everything that is yet to come.

The young woman needed to get used to the reactions in everyday life. Suddenly she stood out of the crowd and was being stared at. Although people certainly didn’t mean it badly, Isabel describes this feeling as unpleasant. She doesn’t want any pity either but prefers to be treated in a normal way or to be addressed directly about her scars. “Jeez, what happened to you?” she was once asked by an old woman. Isabel wanted to turn away and run right off immediately.

Isabel deals with her scars openly. She rarely covers them in everyday life. Only on special occasions does she completely cover them with camouflage technique: “On photos you can hardly see anything in this case. That’s nice for the memory.” Apart from that, Isabel used to deal with her scars by owning a whole collection of scarves. She used to hide her scars on her neckline in the winter and summertime. However, since attending high school she no longer wears scarves. “That’s how my new class got to know me the way I am.” She has never regretted taking this step. It worked out. Her classmates accept her the way she is. Some of them ask her about her scars, and some don’t. In any way, she is not stared at or excluded. “Maybe someday I will give my scarves to someone else who might need them.”

The accident has changed Isabel. Today she feels more empathy for other people who have had a similar experience. She also got rid of prejudices. For example, when her colleagues are giggling about the appearance of a guy, she prefers taking a look at the person behind the façade. After high school she would enjoy a job that requires working with people. Maybe it’s an advantage if you know from your own experience what it’s like when you need to let someone else brush your teeth”.

This text was published on www.hautstigma.ch